Following our recent three-part series focusing on the Republic of Ireland as a leading financial hub and the sectors driving the nation’s economy, we now look across the border to Belfast to learn more about the economic outlook, key growth sectors and what the city offers to new businesses.

We caught up with Hayward Hawk, one of our partners based in Belfast, to see what they had to say about the city in 2019…

“The phrase “Belfast is booming” may be a bit of a cliché but it doesn’t take a lot to see the city centre’s construction of new offices, hotels, apartments and more, which speaks for itself. Over the past decade, Belfast has excelled as a hub for innovative tech firms, with a fantastic blend of start-ups and established companies, both from mainland Europe and North America, many of which are household names. On top of a strong economy and established professional services, engineering & public sectors, there is a great air of positivity in the city”.

Hayward Hawk was founded by industry experts Richard Waterson and Stephen McDowell in 2016, providing high-end recruitment solutions for the technology industry in the UK and Ireland. 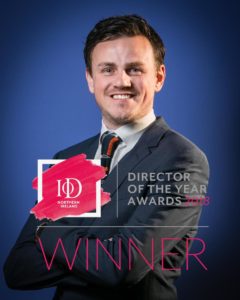 Let’s take a look at Belfast and how, despite a turbulent political and economic history, it remains an attractive location for multinational corporations to base themselves and their employees.

With a population of roughly 340,000 in the capital itself and over one million people in the wider region, Northern Ireland’s population is tipped to reach two million by 2026. 18.6% of the city’s population are younger than 15 years old, while 41.6% are under 30. The high standard of education, with the city hosting a Russell Group university (Queen’s University Belfast), is one of many factors which led to its top global ranking for quality of living (Mercer). Other attributes include affordable living costs, easy access to natural resources and low-cost office space. According to Start-up Cities Index, in 2017 Belfast was voted among the top UK cities to start a new business, with salary costs lower than the rest of the UK and a commitment to reduce corporation tax to 12.5%. Plus, it was the second most successful in the UK (after London) in attracting US tradeable services FDI projects. Alongside these factors, the city has become Europe’s leading destination for new software development projects and nearly 75% of investors in the region have reinvested due to such positive activity.

So, despite the challenges which have riddled the city’s socioeconomic development, Belfast is actually in a prime position to welcome new business. The recent approval of the Belfast City Deal reflects the city’s prioritisation of creating ‘a globally competitive economy that works for everyone’.

What is the Belfast City Deal? The city has been awarded £350 million investment, as announced in Chancellor Philip Hammond’s Autumn Budget in October last year. Adding to this, the NI Executive is expected to match the investment, with various councils also contributing over £100 million. One of the many expected outcomes is 20,000 new jobs, alongside a 10 year programme of inclusive economic growth which hopes to result in an increase of £470m GVA.

Belfast has excellent academic links. Queen’s University, a prestigious Russell Group UK University ranked in the top 180 universities in the world, is only walking distance from the city centre. Ulster University, with four sites throughout Northern Ireland, has recently commenced building work on its new and improved Belfast site, ranked within the top 80 UK universities. These universities attract students from across the country and globe, which is a bonus for start-ups looking to take on graduates and qualified labour.

Belfast has very strong inward investment. In 2018, Invest NI announced almost 3,900 new jobs in Northern Ireland, over half of which were generated by inward investment. These jobs alone are likely to generate more than £122 million to the NI economy in salaries annually.

When starting a business in Belfast, support to create a business plan is offered by Invest NI. Enterprise Northern Ireland provide training, business loans and premises across the country.

Access to commercial space and lettings for start-ups and growing businesses is available from Belfast’s NI Science Park, only a 10-minute drive from the city centre. The park offers work space, runs conferences or events and encourages networking.

Recruitment Entrepreneur is a global investor in recruitment start-ups.
Apply now if you’re interested in launching or scaling a recruitment business:

Register your interest in joining the Recruitment Entrepreneur team

Register your interest in investment